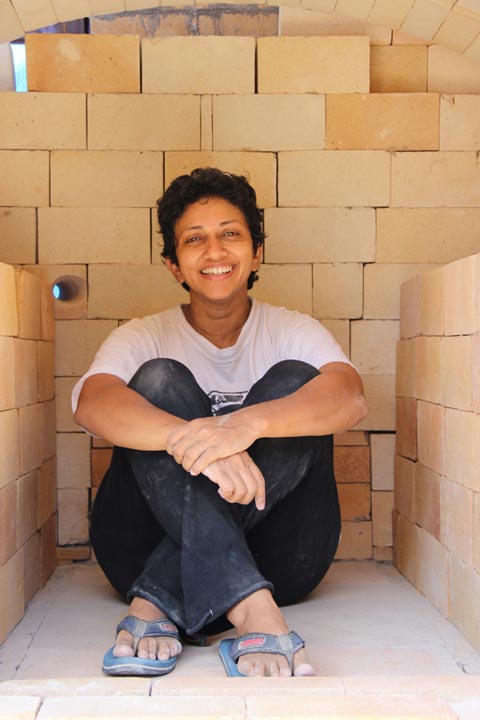 Growing up with a creative and supportive family, Kaveri found her way very naturally into clay around 1995, and has remained with it, since.

A short stint in Chennai under Hans Kaushik, and then under Padma Rajagopal in Studio Alpha near Mysore, made her realize that she had indeed found her calling in clay.

She had a total immersion in claywork in 1996 and 1997 learning pottery under Ray Meeker at the Golden Bridge Pottery, (GBP), in Pondicherry, India, where she got her basics and a strong foundation in wheel thrown pottery, and woodfired kilns.

After a year of teaching pottery in Sishya, a school in her hometown, Chennai, and conducting workshops for adults and children around the city, she was offered an opportunity to work as Studio Assistant and Teaching Assistant to Ray, at GBP, through all of 1999, and also work as workshop assistant for workshops conducted by Jane Perryman and Mike Dodd.

Since then, as she slowly set up her own small, one room studio in the city over the next several years, or even while she worked with Entertainment Education with an NGO working with women and children from economically backward communities, she has kept in touch with clay by teaching it through regular classes or short term workshops.

Kaveri has built kilns and set up Ceramic Centres for other organizations and also shown her own work in a few group shows. She has worked for art, craft and heritage centres, as well as galleries, conducting workshops and helping develop their infrastructure, facilities, and repertoire.

In March 2014 Kaveri launched her own 45 day long, crowdfunding campaign to realize her dream of having a wood fired Soda Kiln. The campaign on the Wishberry platform succeeded, and she now has India’s first, and (as yet), only Crowdfunded Kiln, at her Pothole at The Farm.